In need of additional support? 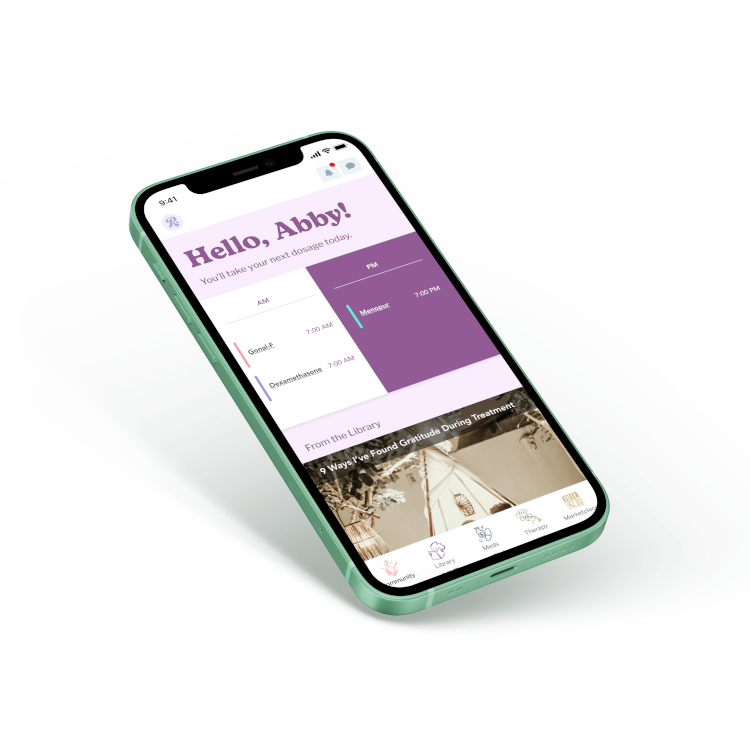 Join our always-free, vibrant, and supportive community, where you can meet thousands of others going through similar experiences and gain access to tools and resources you didn't know you needed on your fertility journey.

Beta day. A day filled with so much hope, and yet so much anxiety. A day when you find out that either you’re pregnant, or you’re not. Quantitative hCG testing, often called beta hCG, measures the amount of hCG present in the blood. So on beta day, your blood either contains the hormone hCG, or it doesn’t.

For those of you who don’t know what hCG is, let me explain. According to The American Pregnancy Association, hCG (Human Chorionic Gonadotropin) is often called the pregnancy hormone because it is made by cells formed in the placenta, which nourishes the egg after it has been fertilized and becomes attached to the uterine wall. hCG levels can first be detected by a blood test approximately 11 days after conception and by a urine test approximately 12-14 days after conception. Typically, hCG levels will double every 72 hours for the first 8-11 weeks of pregnancy and then will decline and level off for the remainder of the pregnancy.

That seems straightforward enough, right? Well, when you’re going through fertility treatments, the stakes feel really high. Maybe you’ve been trying for months, or even years. Maybe you’ve gone through more failed cycles than you can count. Maybe you’re finally trying again following a pregnancy loss. Whatever your story has been up until this point, there is so much hope that goes into beta day. And when you hear those words on the other end of the phone telling you you’re “not pregnant,” it is completely and utterly devastating.

But what happens when you get a positive at-home pregnancy test and a ‘good’ hCG level, but then your numbers fail to rise appropriately? I believe those stories aren’t told nearly enough; and, unfortunately, that’s exactly what happened to me after my most recent frozen embryo transfer. It turns out hCG is way more important than I thought in early pregnancy, and slow-rising hCG levels after IVF ultimately identified my miscarriage. Here is my story:

This summer, my husband and I decided we were finally ready to start trying again. Our twins were not babies anymore, and the trauma of infertility, a high-risk twin pregnancy, and a traumatic birth had begun to fade into the background. So, we transported our remaining embryos to a new fertility clinic, received our big box of meds, and began prepping for the frozen embryo transfer cycle that would, hopefully, lead to baby number three.

I should note that the frozen embryos from our first IVF cycle were not genetically tested to identify potential genetic mutations that could influence viability, so going in we knew there was a chance that our embryo transfer could fail, or worse, result in a miscarriage. But it was a chance we were willing to take, considering how expensive preimplantation genetic testing for aneuploidy (PGT-A) is and the fact that we already have two healthy children from that same batch of embryos. We decided to go full-steam ahead.

The two-week wait following the embryo transfer was tough, as expected; but this time felt different. Because we are already parents, our twins kept us busy, and I genuinely felt okay with whatever outcome was in store for us. However, thinking you’ll be okay and actually being okay when the inevitable happens are two very different things.

On a Thursday, at 7 days post-embryo transfer, I peed on a stick and got my first positive pregnancy test. I honestly couldn’t believe it. I was excited but hesitant to get too attached too quickly. As an IVF patient, I know all too well that a positive urine pregnancy test doesn’t always mean a healthy baby. Lines get lighter. Beta levels drop. Miscarriages occur. But then again, sometimes the opposite happens. Lines get darker. Heartbeats flicker. Milestones are hit. Babies are born. Miracles happen.

On Friday, I went to the fertility clinic for my beta blood test, and my hCG level came back at 48. I’ll be honest, my heart sank a bit when the nurse told me the number; with my twins, my first beta had been over 300! But I told myself that every pregnancy is different, and the nurse reassured me that 48 was considered a good result for only 8 days post embryo transfer.

So for the next three days until my second beta test, I believed I was pregnant. I calculated my due date. We made plans to convert our guest bedroom into a nursery. We were so thrilled to give our kids the greatest gift, a sibling. But then on Monday, when I got the results of my second beta, I found out that my hCG level hadn’t doubled appropriately. In fact, it had remained at a near-standstill. 49. It had only gone up by one point.

My doctor called me personally to break the news, but I didn’t need her to tell me what stagnant hCG levels meant; I already knew it wasn’t good. She said I was likely having a chemical pregnancy, which is when a fertilized egg implants into the uterine wall and cells that would become the placenta begin to produce levels of hCG, but the implantation does not progress, and the cells don’t develop all the way into an embryo and placenta. In other words, I was having an early miscarriage.

My doctor instructed me to come back to the office two days later for another blood draw to confirm that my pregnancy wasn’t viable. I did, then I got the call from the nurse, and it was all over as quickly as it began. Now, all we have left of our second pregnancy is a picture of our perfectly imperfect 3BC embryo and a positive pregnancy test for a baby we will never get to meet earthside. I was pregnant, and now I’m not.

If you are struggling with slow-rising or declining beta levels, I’m so sorry. Being in ‘beta hell’ is not a fun place to be. Knowing you’re pregnant, and knowing that you won’t be anymore in a few days is heartbreaking. Watching your hCG levels decrease with every blood draw is something I wouldn’t wish on anyone. Eventually being told you are no longer pregnant is life-changing.

Before infertility, I had no idea that hCG levels were so important in early pregnancy. I didn’t even know that 1 in 4 known pregnancies end in miscarriage. And I was completely clueless that doubling hCG levels were an early indicator of a healthy pregnancy. Unfortunately, I will never look at a positive pregnancy test in the same way again.

If you are under the care of a fertility clinic, you can get your hCG levels drawn there, often with same-day results. But what if you don’t have a fertility clinic or a doctor or simply want more reassurance after taking an at-home urine test? Thankfully, there are companies making it easier than ever to test your hCG levels. Pixel by LabCorp now offers a quantitative hCG serum test that can confirm pregnancy with greater accuracy and earlier in gestation than many home pregnancy tests. It can even be used to rule out an ectopic pregnancy or monitor declining hCG levels before or following a miscarriage. You can order the test ($49) without having to visit a doctor. Just go to your local Labcorp for the blood draw, and then view your easy-to-read results online. Click here to learn more!

Are you a cash pay patient?

That's great!
That's too bad! We only serve cash pay patients at this time.
Talk to your insurance company.