I Wasn't Mentally Prepared For "The Other Side" of Infertility

“Hello from the other side.

I must have tried a thousand times….

Okay, tell me you didn’t start singing Adele there! I know, I know, Hi Kelly, thanks for rubbing it in our face that you had a baby. But wait, hear me out! I’m here to tell you that things aren’t always as they seem and that there is an “other side” to fertility treatments.

One day it will end.

Finishing treatment was something I never actually thought about while I was in the midst of it. Being told from a very young age that I was infertile, I knew having a family of my own would be a battle. I was so focused on the next appointment, the next set of numbers, the next protocol, that I never stopped to think about what would happen when it finally worked.

Then one day I got the news I had been dying to hear—I was pregnant. It was all over. I sat there thinking that I should be happy. I was victorious! I conquered the beast! Except I was thrust into the unknown between when you get that positive beta and the first ultrasound. I wasn’t prepared for this next stage. 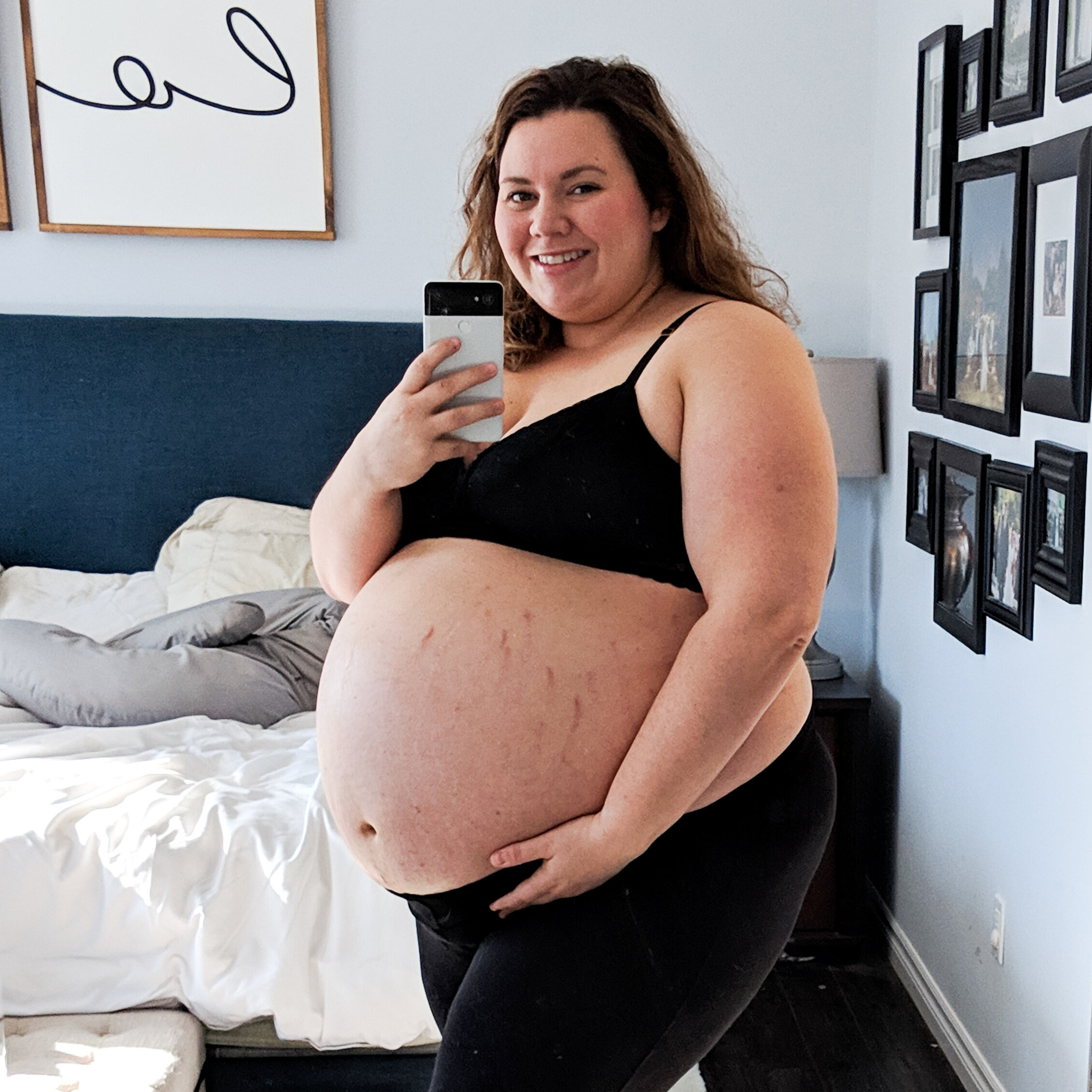 Going from knowing absolutely everything about infertility to knowing next to nothing was a shock, and I couldn’t quite wrap my head around it all. What did they mean I had to wait a whole month before seeing if anything was growing?

Even during our pregnancy with Baby #2, my husband and I booked the first ultrasound appointment of the day so we wouldn’t have to wait any longer. We were so naïve and so hopeful. I’m sure the ultrasound tech was trying to be professional, but she came off as quiet and cold. She wouldn’t answer my questions, let alone acknowledge anything I was saying. A 15-minute exam was taking so much longer than I had anticipated. As I lay there counting the ceiling tiles, silent tears started running down my cheek.

After 40 minutes, my husband messaged me from the waiting room asking if everything was okay. I told him I wasn’t sure. The technician wasn’t speaking to me. I couldn’t see the screen, and she wouldn’t answer any of my questions. She just kept pushing on me and staring at the screen. So I just kept counting the tiles and silently hoping this would all be over soon. I messaged my husband again and told him it was okay if he went to work. We had been through a miscarriage before. We could talk about it later.

That sweet, sweet man told me not to be silly. He’d wait, and we’d deal with it together. Finally, after 55 minutes, the technician said she’d be right back with my husband. I reached for him instinctively the moment he walked into the room. I needed him. He needed me. We braced for the impact together.

Bracing for impact seemed to be our normal; this is what we were used to after years of infertility. I was diagnosed with PCOS when I was 22. We always knew having a family would be difficult. We waited until we were 30 to try and be parents.

With my diagnosis came the express pass to the fertility clinic. Falling pregnant was a tough road with daily cycle monitoring, needles, ultrasounds and constant tweaking of meds. After 11 months and 186 ultrasounds and blood draws we finally got the amazing news that a new little life—our first daughter—was inside me. A true miracle! What we didn’t tell everyone was that there was a second little miracle too pure for this life was on board as well. By our next ultrasound, that babe was gone. We celebrated the little bean that was growing strong inside me so much. She was so wanted and so loved! 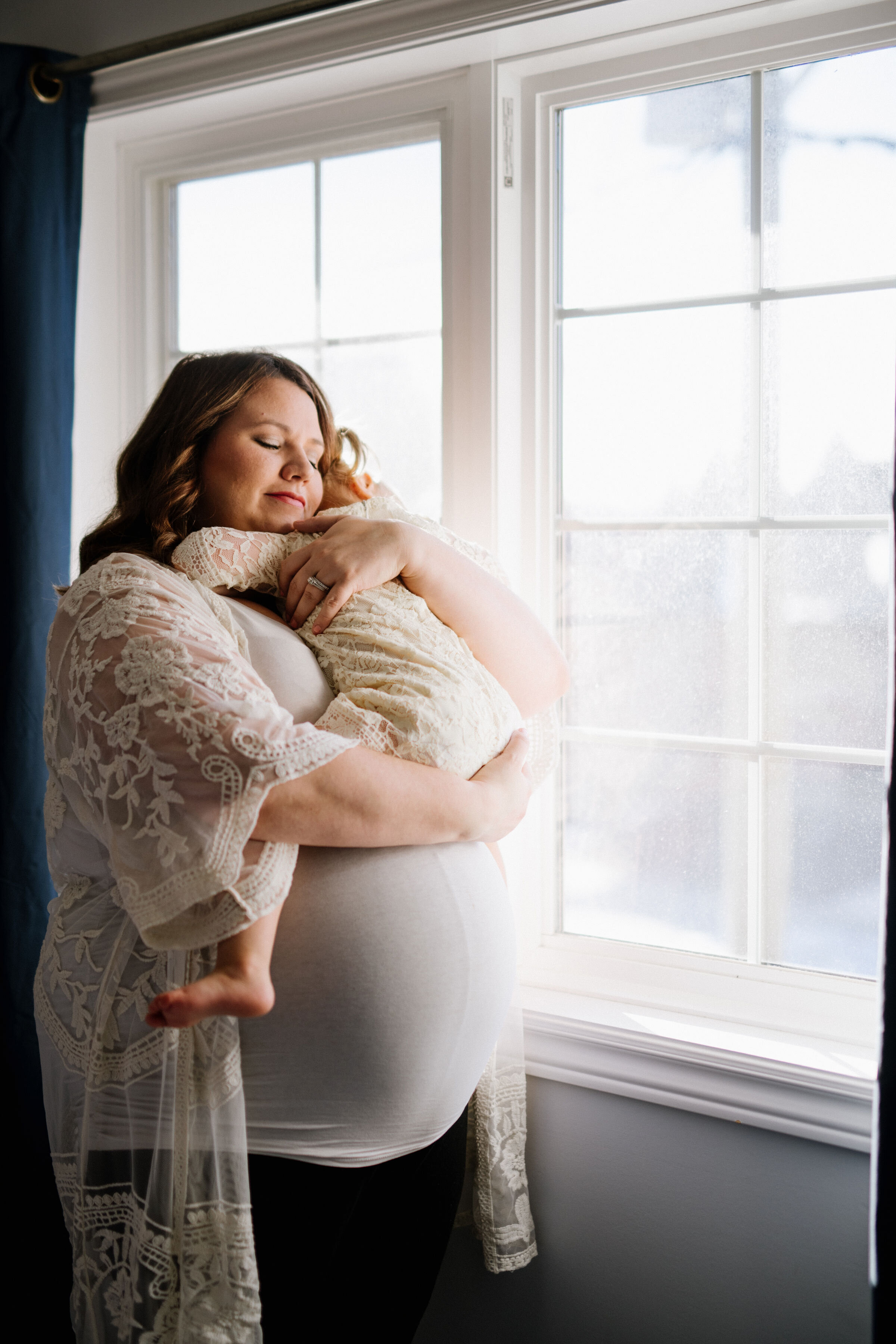 When we decided to try for baby number two, we headed back to the fertility clinic to start that song and dance again. The funny thing about PCOS is that it can change between pregnancies. Sometimes a pregnancy kick starts your endocrine system to start behaving properly, so I had to go through all of the tests again to see if anything had changed between then and now.

Nothing changed, or so I was told. I had just returned to work from my year-long maternity leave, so we decided to take a few months before starting medicated cycles again. Our daughter had just turned one, and I wanted at least two years between babies. Suddenly one day I started bleeding heavily. It was so different from a normal period. I called the clinic, and after a quick blood test, I was given the news. I was having a miscarriage. I was shattered! After controlling every aspect of my fertility, this sad surprise came out of nowhere. Here’s the thing about being told you’re infertile: you’re never prepared for a surprise baby, let alone a surprise miscarriage.

We returned to the fertility clinic a few months later excited, curious and cautious about what lay before us. The second time through fertility treatment was so much more straightforward than the first time around. Two cycles in, and my beta numbers came back positive. But I couldn’t shake the feeling that this pregnancy was different. Coming off of a loss, I assumed this would be one, too.

We were used to disappointments more than joy in our quest to build our family. So as I lay there on the table with a very quiet ultrasound tech pressing on me, I couldn’t help but let my mind go to the worst-case scenario. Holding onto my husband, the ultrasound tech turned the screen, and I couldn’t process what I was seeing. There were two circles. I could see a heartbeat, then two heartbeats. My brain couldn’t process what my eyes were seeing! I was in pure shock for hours. There were two babies! We were having TWINS! No wonder I was so sick! 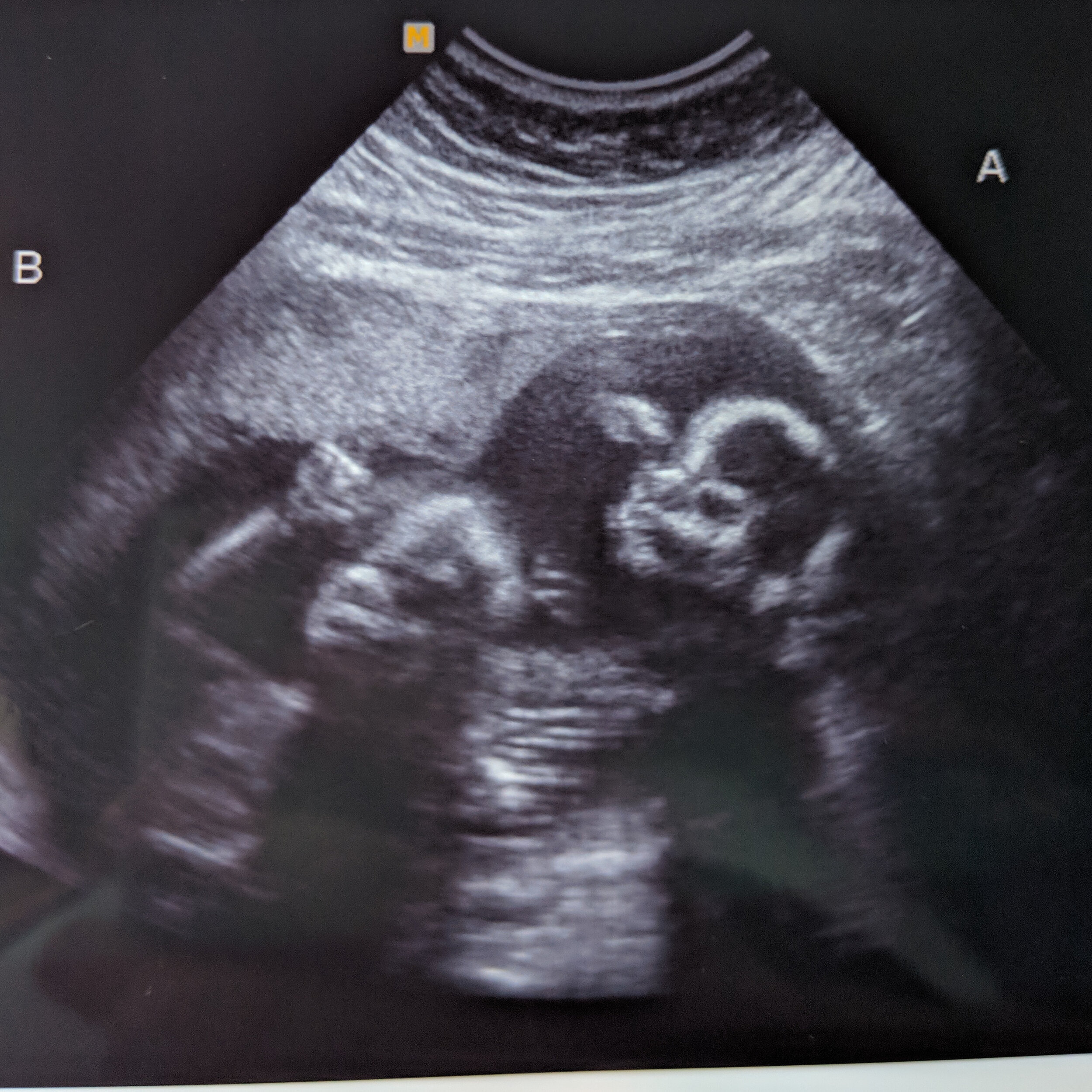 My heart raced, and every possible scenario rushed through my mind. We need a bigger house, a van, daycare, university tuitions, weddings! Double everything! It took me a few days to realize that this news also came with double the love, hugs, kisses, and laughter. We were going to be okay; I just knew it.

The next few months flew by in the flurry of appointments and broken sleep. I celebrated each milestone knowing the next one may not come. I knew the stats. We had a high chance of premature labor and ending up in the NICU. My first goal was to make it to the new year. I was due at the beginning of March, so that was totally realistic. As that ball dropped I knew 2019 was going to be a good year. My oldest daughter’s birthday is January 24th, so that became my new goal. I just had to get past Nora’s 2nd birthday. Blowing out her candles I thought, okay, the babies can come any time now.

The next morning the babies decided to take me up on that offer, sending me into labor minutes after everyone left for the day. Going into labor alone is a strange experience. After a desperate call to my doula, my husband, and my Mom (in that order) we were off to the hospital. Moments after walking into the hospital I was 9 cm dilated with feet and a bum in the birth canal.

They whisked me away for an emergency C-section where we quickly saw Katie Anne and Hazel Mae take their first breaths. Going into labor at 34+5 weeks pregnant, we knew these girls wouldn’t be coming home with us right away. 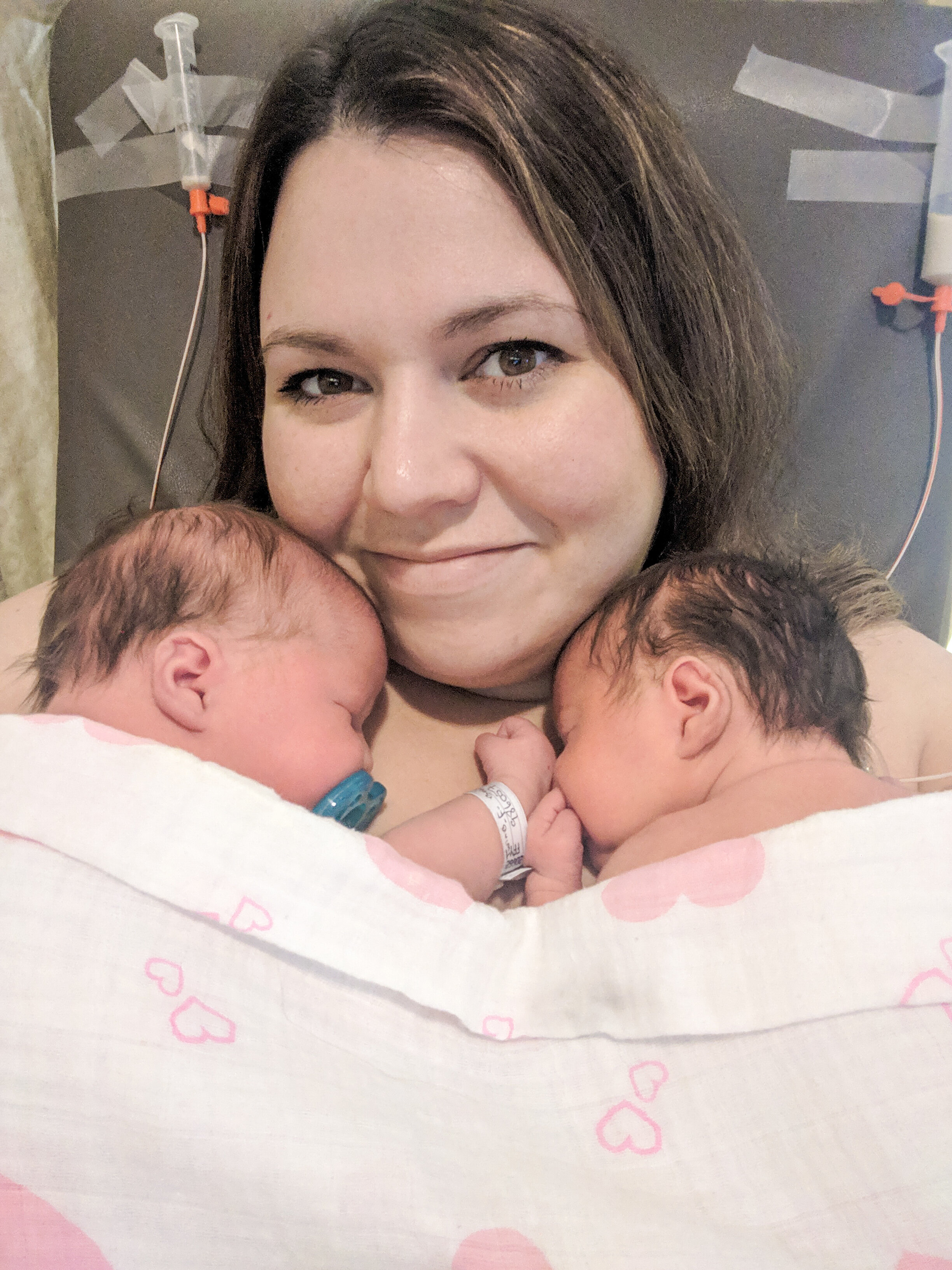 But here we are now on the other side: three miracle babies, two years, and one exhausted mama. I’ve spent the past five years riding the fertility rollercoaster and survived with the golden prize that everyone is vying for (x3!). This is something I will never take for granted, and I will always know just how precious these babies are.

So, hello from the other side! Although it feels all-encompassing at the moment, know that this is not your whole story. It’s just one chapter of your life, and one day it will be over. So for now, keep moving forward. You’ve got this! 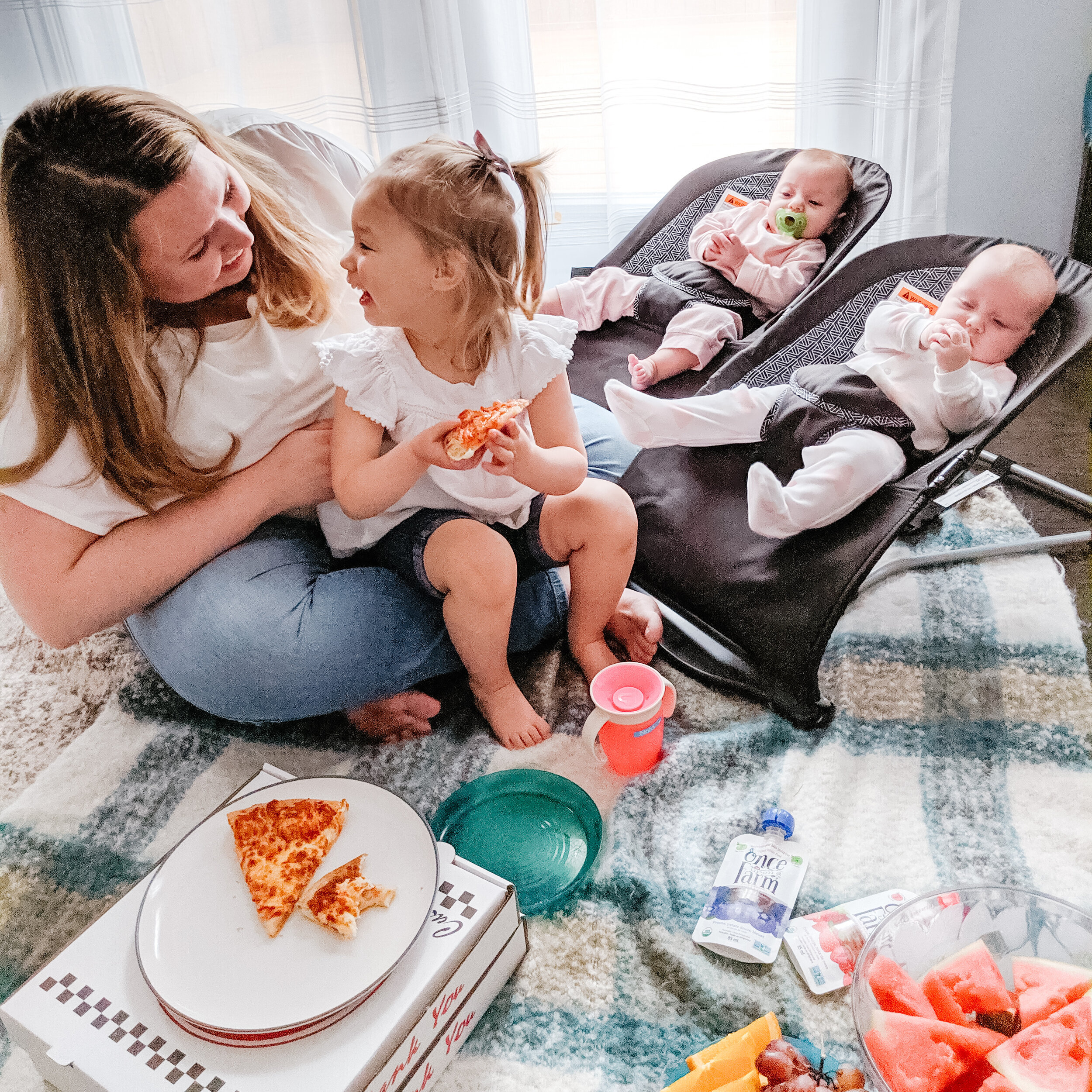 Kelly Bailey and her husband Tom live in Kitchener, Ontario, Canada with their three children, Nora, Katie and Hazel. After being diagnosed with cervical cancer at the age of 21 and PCOS at 22, Kelly has spent over a decade focused on her fertility. As a fierce body positivity advocate, Kelly celebrates women of all shapes and sizes and meets them exactly where they are. You can find Kelly documenting the ups and downs of raising #3under3 and #twinlife on Instagram @kelly_e_bailey or on her blog www.kellyebailey.com.