Twin Sisters With Endometriosis Develop a Supplement For Period Pain Catherine (Cath) Lee and Lauren (Lar) Lee-Crane, here! We’re identical twin sisters that both suffer from endometriosis. We live in Atlanta, Georgia, and recently started a supplement company called Semaine Health in hopes of creating and sharing a more natural and healthy way of dealing with period pain. 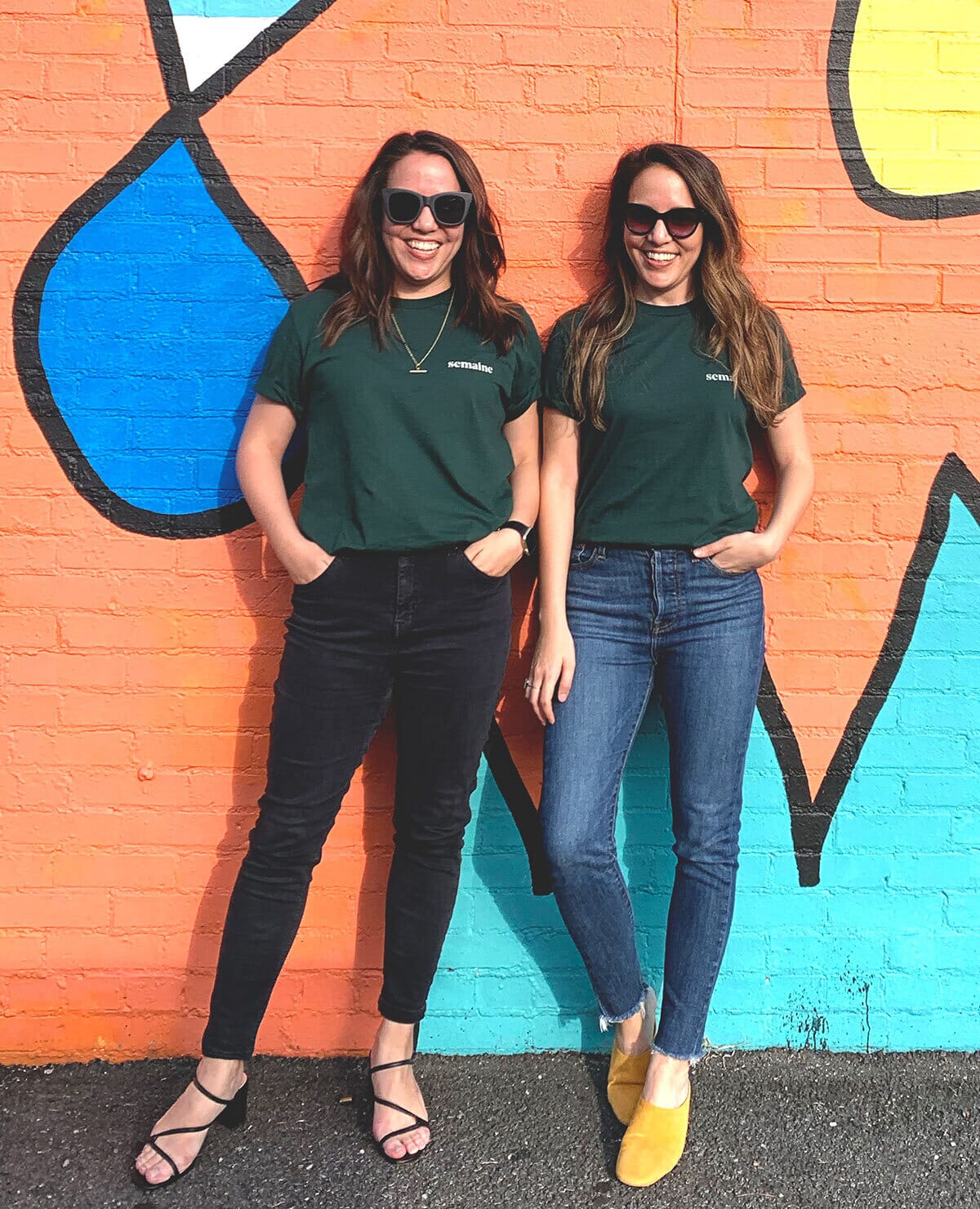 Lar: When we were kids, our mom was diagnosed with endometriosis after having a cesarean section. She explained it as causing really painful periods. Growing up, we never questioned if there was a treatment for it because we thought monthly pain was just part of being a woman.

I remember my period being really heavy throughout high school and having to miss college classes because my cramps would be so bad. Still, at that time, I just figured severe pain was normal and that my sister and I were some of the unlucky women who had really painful periods. Trips to the gynecologist always ended in the same advice: stay on birth control and take over-the-counter pain meds to get through your period each month.

My period pain continued to worsen throughout my twenties. In my mid-twenties, my husband and I moved to Scotland and I decided to go off of birth control. As my pain got worse, I was determined to heal my body naturally. I started a version of the endometriosis diet and went strictly, gluten-free, sugar-free, soy-free, and vegan. This lifestyle wasn’t easy to maintain, but I was willing to stick with anything that might help my pain. While the change in diet didn’t lessen the pain, it did improve my chronic IBS, something that Cath and I have suffered from our whole lives and we now know is directly connected to our endometriosis.

Although the pain could be excruciating at times—I would describe it as sitting on a bouquet of dull knives and like the weight of a bowling ball was pulling down my pelvis at the same time— I never thought to push my gynecologist for more options because I knew there wasn’t (and still isn’t) a cure for endo. I assumed my options were limited to pain killers and hormonal treatments. I thought I’d just always have to deal with terrible pain the entire week of my period until I hit menopause.

Then, in 2013, I started having even more intense pain on my left side when my period started. The first time it happened, I literally heard something “pop” inside of me, and I couldn’t think through the pain. I felt like I was going to pass out. I think most people would have gone to the hospital at that point, but I still thought “I have painful periods; this is just a new kind of awful pain I have to deal with.” After experiencing this for a few months, I was getting concerned and had to fight my GP to give me an ultrasound, even though I could feel a lump around my left ovary. 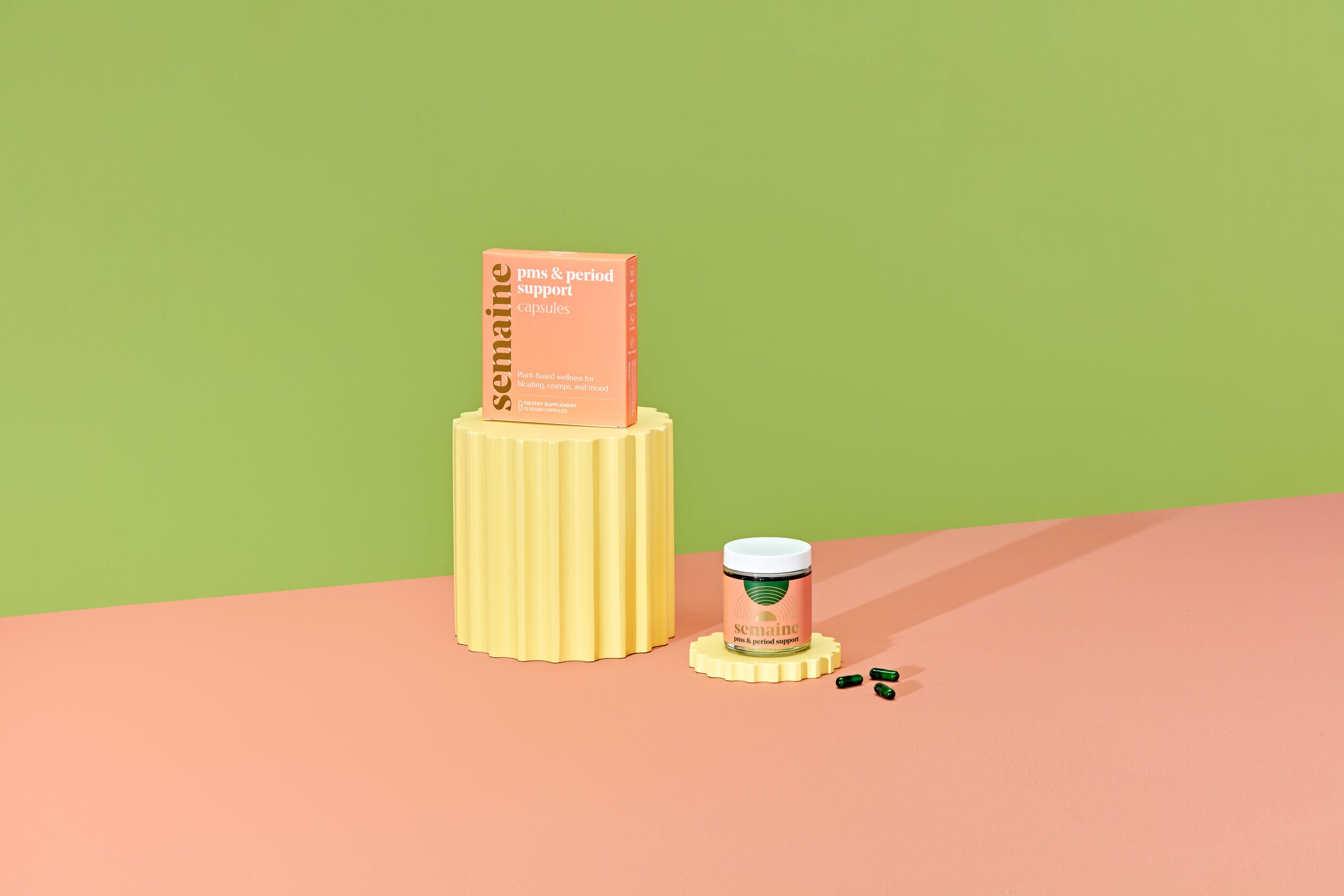 It turned out that I had an endometrioma on my left ovary that was causing the pain and the lump. Before I could have surgery to remove it, it ruptured (again), but this time I fell on the floor and couldn’t move. I just lay there for hours until I realized I needed to get to the hospital. Once I was there, even after explaining the endometrioma, they insisted it was appendicitis. After begrudgingly sending me to the gynecological unit, the nurses said it was probably an STD and gave me the most painful pap smear I have ever experienced. At that point, I was probably becoming septic and for four days I had a fever of 104 before they decided they needed to do surgery (after which they concluded I did indeed have endometriosis). I was in the hospital for two weeks.

Six months later, after intensely researching everything I could, I found an excision specialist in Atlanta, where I had my second endometriosis surgery. My pain after that went from a 10+ to a 2-3! I feel so lucky that I was able to afford that excision surgery, which is still considered the gold standard for endometriosis treatment. After the surgery, my endo specialist explained that I had deep infiltrating endo (Stage IV), and the endo had pulled my ovary and stuck it behind my uterus. It’s been 8 years since that surgery, and since then my pain levels have crept up a degree or two.

Cath: Even though Lar and I are identical twins, our endometriosis symptoms differed in our 20s. Where Lar started developing sharp jabbing pain around her tailbone, I would get horrific cramps, backaches, and extreme pain whenever I had a bowel movement on my period. There were days when I thought I would pass out from the pain.

I was on birth control, so I “managed” my period pain by skipping my period as often as I could. That worked for a while, but as Lar read up more on endometriosis and told me about her findings, I realized that I couldn’t just ignore my pain. It was getting to the point where I would have to take days off of work every time I had my period.

A year after Lar had her surgery at the Center for Endometriosis Care, I had my excision surgery. That’s when I was diagnosed with stage II endometriosis. Unlike Lar, my endo was closer to my digestive organs than my reproductive organs.  Despite there being no cure for endo, I’m grateful and feel privileged to have had surgery by an endometriosis specialist and support from friends and family.

Why We Started Semaine Health

Lar: The excision surgery significantly reduced my period pain, but a few years after surgery, some pain began to return. By this point, my husband and I were working at the University of Washington in Seattle. My husband, Matt, is a research biologist and has been by my side throughout my whole endo journey. When I started getting pain again—and the accompanied anxiety of anticipating more pain— Matt started to research natural ways to combat the pain.

Through hours of research, Matt discovered that there is a strong connection between period pain and inflammation. It makes sense: most of us feel pain when we’re inflamed in other areas of our body, and it’s no different with our reproductive organs. According to several studies, women with period pain have higher inflammatory markers leading up to and during their period. Matt ordered different anti-inflammatory ingredients, tried different amounts, and added them to my morning smoothies. 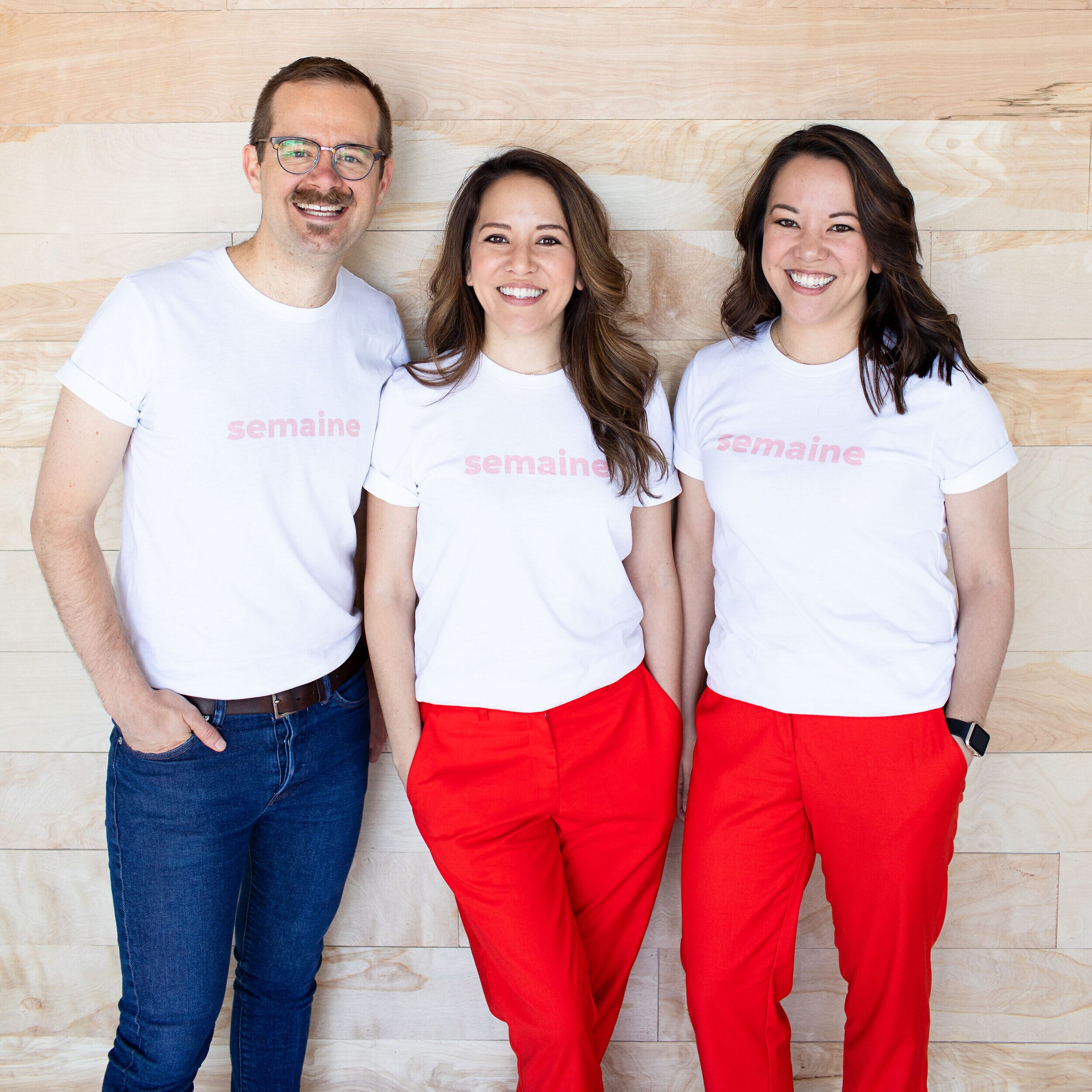 After a few months of trying different mixtures, I had my first pain-free period ever. I couldn’t believe it. I sent some to Cath in Atlanta and it worked really well for her, too. That’s when we had the realization that others could benefit from this formulation we had discovered.

Cath: Fast forward to March 2020, Lar and Matt moved back to Atlanta and into my house to start Semaine Health full time. I quit my full-time job in December of 2020, and now the three of us run the company from a loft in downtown Atlanta.

Semaine PMS and Period Support is unique because unlike other supplements on the market, it doesn’t directly adjust your hormone levels, but focuses on lowering inflammation when you need it the most. You can take it daily, but you can also use it like a plant-based Midol and just use it the week of your period (or whenever you need it the most throughout your cycle).

We started selling Semaine just from our website, SemaineHealth.com in March 2020, but we've always wanted to make it as accessible as possible. We just launched in select Target stores nationwide, and are now on Rescripted's Marketplace; we’re so excited to continue to grow and help more people like us!

We’ve also been able to lower our prices since last year because of the increase in production. Our goal will always be to maintain the highest quality ingredients while being something most people can afford because we firmly believe that wellness should be attainable for everyone.

Lar: Even though it took over 15 years to get diagnosed, we have been lucky in our endometriosis journey: we were both able to have excision surgery done by a specialist, Matt came up with an amazing formulation to help with our pain, and we’ve gotten so much love and support around Semaine from the endo community.

Ten years ago the endometriosis community was much smaller, and there weren’t many resources online. Now there are so many great organizations in the U.S. and internationally that help educate and advocate on behalf of the one and ten women who have this disease.

Cath: Having dealt with endometriosis for the majority of my life, I feel like, in the past five years, I’ve finally started to understand how important it is to listen to my body and to treat it kindly. For so long I wanted to disassociate from the pain, use nothing but tampons, rely on over-the-counter pain killers, power through my everyday life as much as possible, and hold my breath when I was on my period. Now I try to eat better, especially before my period, reduce my stress levels, schedule fewer meetings and activities the week of my period, and take Semaine three times a day on my worst period days. 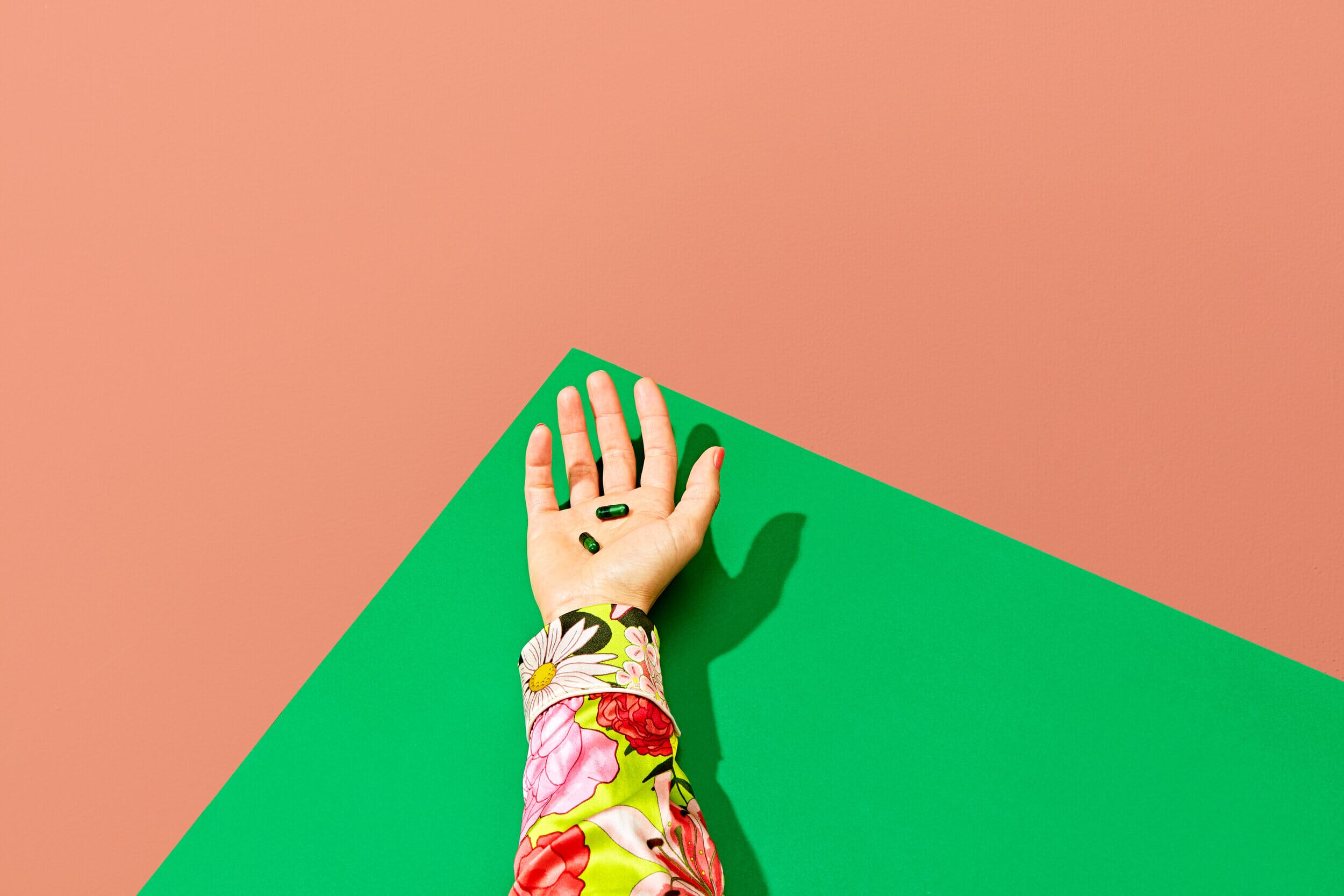 Lar: Even though my pain was greatly reduced after my excision surgery and Semaine helps with my period pain, I still get anxious before my periods. I have PTSD from my surgery experiences and past period pain, which many people with endo can relate to. I stick to a low inflammatory diet and continue to work on reducing my stress levels, especially around my period with downtime and daily affirmations.

There is no cure for endometriosis, but there are treatments. Even though we made Semaine for anyone with painful periods, we hope it specifically helps people who have gone through (and are still going through) the trauma of endometriosis.

Cath: As we grow our company, we hope we can continue to help normalize periods while also helping women realize that their painful periods aren’t normal. The more we talk about period pain, the more attention and research will become focused on women’s health. If Semaine can contribute a small part to putting women’s health at the forefront of the medical community, then we’ll consider our company a success.

Interested in trying Semaine? Check it out on Rescripted's Marketplace.