My Struggle with Postpartum Anxiety

For most of my adult life, I have struggled on-and-off with anxiety. In my 20s, I learned how to deal with it for the most part, but nothing prepared me for the emotional roller coaster that I would experience while going through infertility and IVF. The question “Will I ever be a mom?” was a mainstay in my mind for over a year until I got pregnant with my twins.

Then, during my first trimester, my anxiety turned to fear that my pregnancy was too good to be true and that it was all going to be ripped away from me. I felt better once I hit the 12 week mark, but only until my first pre-term labor scare at 27 weeks. At that point I was faced with the all-too-real worry of my babies being born early and having to spend months in the NICU. Can you sense a trend here? My entire journey to motherhood was fraught with worry, and (mostly) for good reason.

But despite all of the anxiety I experienced before my twins arrived, when they were finally born I was surprised to find that I wasn’t anxious at all. After several pre-term labor scares, they were born at 37 weeks exactly and avoided the NICU entirely. I got to take them home with me from the hospital, which is something I never thought I would be able to say just a few weeks prior.

Once everyone was finally home and safe, I chose to believe that all of the scary stuff was in the past and that everything was going to be okay from that point forward. Even after I hemorrhaged and landed myself back in the hospital for a night, I thought the worst was behind us. That is, until postpartum anxiety hit me like a ton of bricks.

It was one of my many fears during pregnancy that I would end up with postpartum depression. Fun fact: women who conceive via assisted reproductive technologies are more susceptible to PPD and so are moms of multiples, so right off the bat I checked off a bunch of the boxes that put me at an increased risk. Still, 8 weeks into being a mom I thought I had dodged the postpartum bullet. I couldn’t have been more wrong.

No one talks about this, but when you’re home alone with two babies that don’t do much more than eat, sleep, and poop, you are in your own head a lot. You start to ask yourself, “Am I doing enough with them?” or “Am I doing this right?” When you’re a first time mom it’s only natural to question yourself, but when my twins were about 9 weeks old I started doubting my ability as a mom more than ever before. This time, though, it didn’t feel natural. In the span of one day I went from thinking, “Am I holding each one of them enough?” to “What if something happens to them on my watch?” My thoughts quickly turned obsessive, to the point where I was afraid to be alone with my own kids.

Initially, I hoped I could put it out of my mind like I usually did when anxiety creeped in, but when I started having visualizations along the lines of, “What if they drown while I’m giving them a bath?” and “What if I get into a car accident while I’m driving them to physical therapy?”, I knew I needed help.

I called my dad, and he came right away to pick me and the babies up and bring us to my parents’ house. I should mention that my dad is usually the type to tell me not to worry about things that are out of my control, but when he saw the look on my face that day and I told him without hesitation, “I think I have postpartum depression,” he knew it was no joke. Even though having his help made me feel somewhat better because I was no longer alone, I was still having obsessive thoughts that I couldn’t turn off. They spanned from, “What if I trip while carrying them and drop them on their heads?” to “What if I have postpartum psychosis?” For those of you who have never experienced having these types of thoughts (and I hope you never do!), it is the most terrifying and helpless feeling in the world to know that you are responsible for the well-being and safety of two little humans and yet feel incapable of taking care of them. I wouldn’t wish it on anyone. 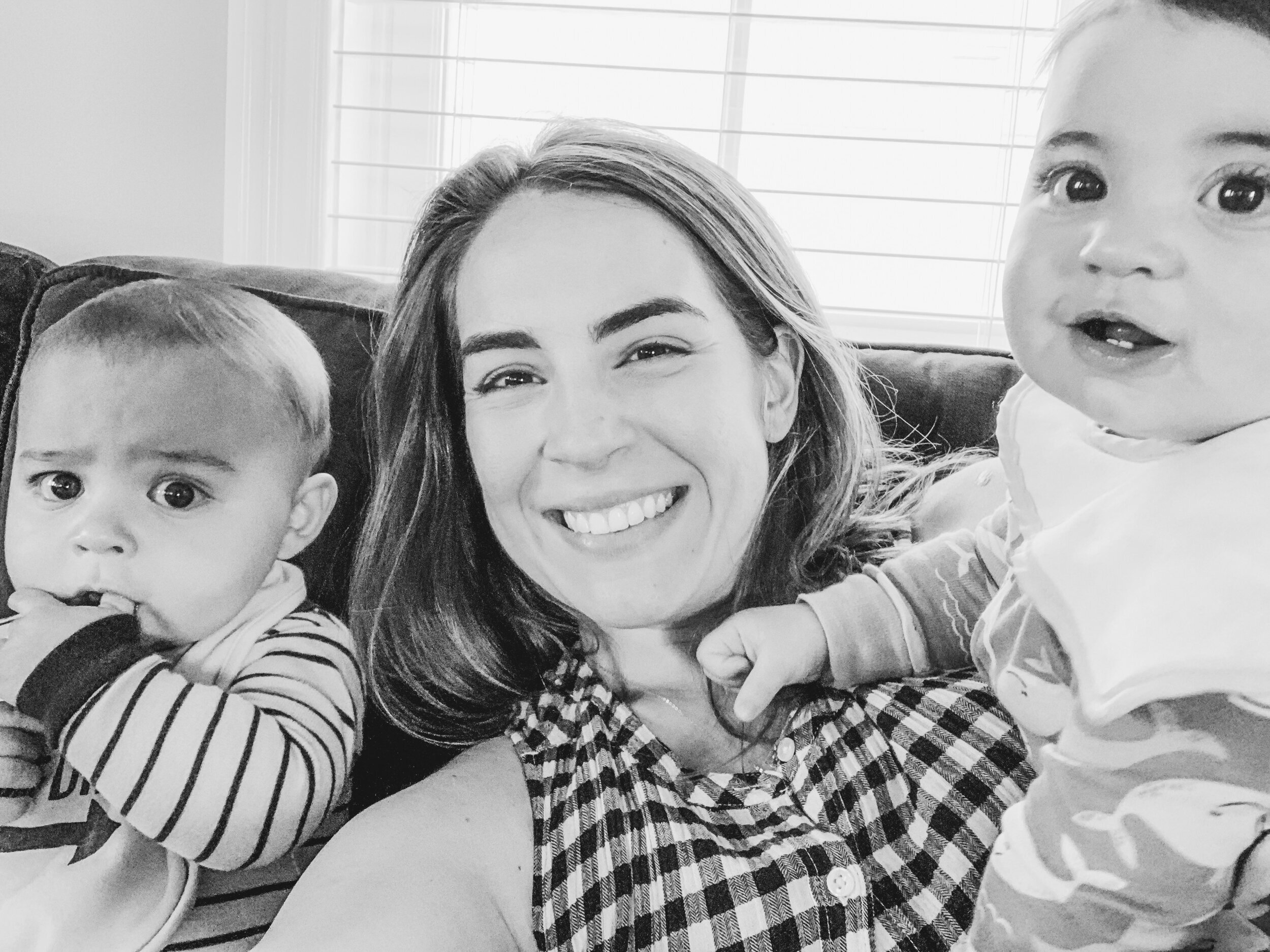 The next day, I asked my mom to take the day off to help me with the kids so that I could call my doctor and a few therapists and try to get an appointment as soon as possible. I made phone call after phone call, and not one person called me back that day. I was in awe that I was seeking help, and yet no one seemed to think my mental health was as urgent as I did. Thankfully, the next day we had the twins’ 2 month checkup, and not knowing where else to turn I brought up how I was feeling with their pediatrician. She not only validated my feelings as postpartum anxiety, she also told me I was her hero for recognizing that I needed help so that I could be the best version of myself for my kids. She even referred me to a therapist who specialized in postpartum mental health and told me not to be afraid to go on anxiety medication if I felt I needed it, which I did. She said I was her hero that day, but really, she is mine.

After a couple of weeks on medication and one or two good therapy sessions, I started feeling like myself again and my postpartum anxiety passed almost as quickly as it started, but I truly feel like I am one of the lucky ones. If it hadn’t been for my kids’ pediatrician, who helped point me in the right direction when it seemed like no one else was willing to, and my therapist who assured me that postpartum anxiety (not just depression) is in fact real and common, especially among new moms of twins, I’m not sure what kind of mental state I would be in right now. Instead, the postpartum fog has finally lifted and I am enjoying motherhood more than I ever thought possible during those early days.

New moms, I don’t tell this story to scare you, but rather to bring awareness to an issue that so many of us experience and yet so few talk openly about. Often times as a new mom you feel like you have to be happy all the time, but that’s not always reality and there’s no need to suffer in silence. Seek help if you feel you need it, and be the hero your children need. You will thank yourself for it later.